Four Reasons Why Brown Water is Coming from Your Taps

When dealing with brown water coming out of your taps, it is best to contact a professional plumbing company in your area to inspect the problem and restore clean water in your home. To help put your mind at ease, here are four possible reasons why you are experiencing brown water from your taps.

Why is Brown Water Coming from Your Taps? 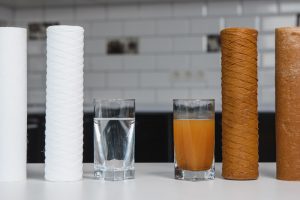 One of the main reasons for brown water from your taps is rusting older pipes somewhere in your property. If you have an older home, chances are the plumbing system in your home was made with galvanized iron pipes. Over time, those pipes will corrode, leading to deposits such as rust and minerals in the water supply, which will cause brown water to come from your taps.

Another culprit could be an old or damaged service pipe. A service pipe will connect your domestic pipes to the main distribution system. If old or damaged, rust particles or other sediments could have settled in your water pipes, which is why brown water is coming from your taps.

If you suspect old or damaged pipes, call Central Plumbing Co. We’ll come out to your property, inspect your pipes, and repair or replace them if we notice any problems.

Changes in water pressure in your pipes can stir up dirt, rust particles, and sediment that coat your pipes and cause brown water to come from your taps. Pressure changes mainly occur during significant temperature changes, when fire hydrants are opened or closed too quickly, or from routine maintenance with city water lines.

If you notice a sudden change from clear water to murky, brown tap water, it is most likely because of a pressure change in your city’s water lines. Typically, these issues resolve themselves within a couple of hours, and it’s nothing to be concerned about. But if you notice brown water coming from your taps after several days, it could signify a different issue.

Your water pipes aren’t the only thing that can start to rust. If you start to notice brown water from your taps, especially when you turn on the hot water, your water heater could be starting to rust. Water heaters have a sacrificial anode rod that helps delay rusting inside the tank. If the rod is entirely used up and not replaced, the inside of your water heater tank will begin to rust.

If you notice brown water coming out of multiple fixtures in your home, it may be time to replace the sacrificial anode rod or replace your water heater. If brown water is coming out of one fixture in your house, however, and when cold water is running, you could be dealing with a rusty pipe.

When you are dealing with rusty pipes, you should call a reliable and trusted plumbing company to come and inspect your pipes.

After a period of heavy rainfall, you may notice brown water coming from your taps. If your home gets water from a private well, surface rainwater could have infiltrated your well through the wellhead and contaminated your home water supply.

Rainwater in your well can introduce harmful bacteria, dirt, and debris into your water supply, causing brown water from your taps. You must not drink the water if this is the case as it is unsafe for consumption.

It is recommended to have your well regularly inspected for any crack to prevent rainwater from leaking in. It is also essential to make sure water drains away from the well to avoid issues in the future.